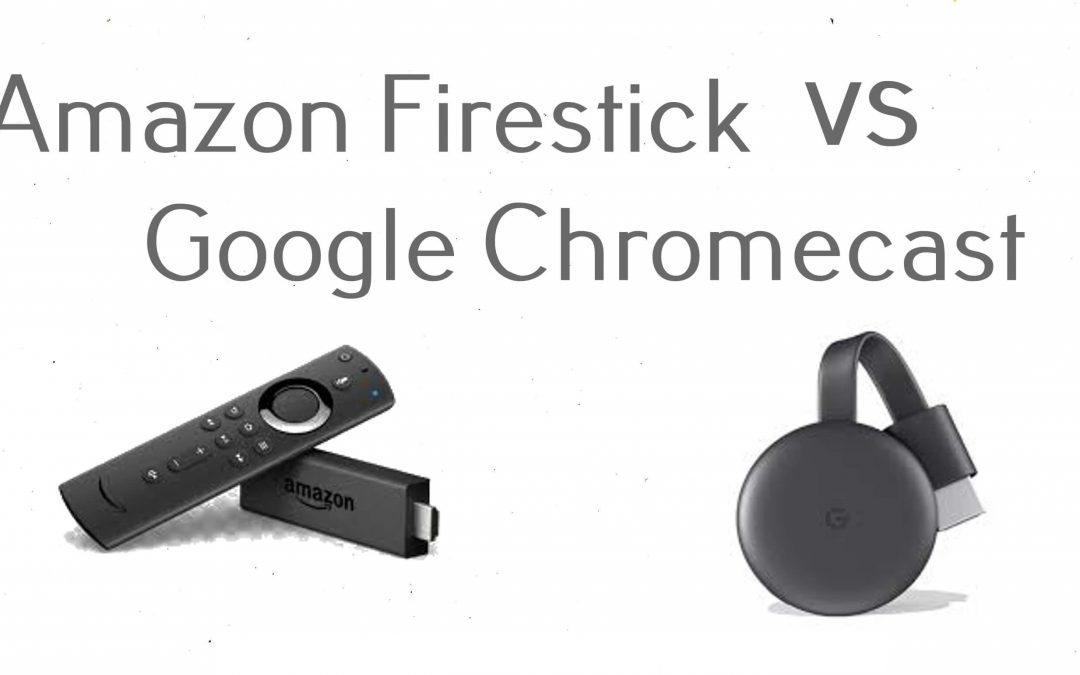 Amazon Firestick is a streaming device which is a plug into HDMI port on your TV type. You can stream all your favourite movies, TV shows, music, online contents, view photos and play games on your big screen over the internet. Firestick supports dozens of apps and games which are available on the Amazon App Store.

What is Google Chromecast?

Chromecast is a dongle launched by Google which is connected to your TV’s HDMI port. You have to cast your smartphone or computer with the Chromecast device to stream all your media contents directly form online or local storage to Chromecast connected TV. To watch the mobile contents on your TV, you should connect the Google Chromecast and your secondary device (mobile or computer) with the same WiFi network.

Chromecast set up process is very easier when compared to Firestick. To set up Chromecast, Plug it into TV’s HDMI port and connect your Chromecast with your home network in which your mobile or computer is connected. Download and install the Google Home app on your secondary device and follow the on-screen instructions to set up Chromecast device.

Amazon Firestick is designed with a user-Friendly interface. It runs on the Android operating system. You can access your Firestick easily form the home screen. The home screen displayed with Six major options like Home, Your Videos, Movies, TV Shows, Apps and Settings and App. These options help you find and search for your apps, games and all your media contents stored in system storage and also search for any web contents.

Chromecast is an android support streaming device which doesn’t come with any special interface. You cannot do anything on Chromecast TV screen, all the navigation and commands take place on your mobile or computer, the same will be reflected on your TV screen.

Amazon provides the Bluetooth remote along with the Firestick purchase. The firestick is paired with its remote when you turn on your Firestick. You can use the remote to navigate through menu options. It is included with the standard play, pause, forward, rewind buttons.

The latest version of Firestick remote is featured with Alexa voice search facility. Instead of using remote buttons, you can use the Alexa voice to search, control playbacks, stream videos, download and install apps or games. In addition to these, Amazon launched an new mobile app called, Amazon Fire TV. This app functions the same as the Firestick remote. This app is supported on both Android and iOS.

On the other hand, the Chromecast doesn’t have any remote control to access its functions. You can use your smartphone or computer as a Chromecast remote. When you cast your secondary device with the Chromecast, the TV screen is mirrored with the same contents shown on your mobile screen. The contents on your mobile screen will be reflected on your TV screen. You can also use google voice or Siri for your navigation.

Firestick supports more than 3000 apps, which are available in the Amazon App Store. It also supports most of the Google Play Store apps because Firestick runs on the Android OS. Firestick not only supports its official apps, but it also allows you to install and access various third-party apps on it by side-loading.

You cannot find Google Play services on Amazon Firestick. Likewise, the Google Chromecast doesn’t support Amazon Prime Video, you cannot stream any of the Prime contents on your Chromecast. Both gives access to many streaming services like YouTube, Netflix, Hotstar, Voot, Sony live and many more.

Amazon Firestick is an excellent streaming device that lets you stream all your media contents in various resolutions including 480p, 720p and 1080p. The maximum range of Firestick resolution is 1080p. To break down the difficulty of HD or UHD streaming Amazon launched Firestick 4K that supports all the resolutions up to 4K Ultra HD.

On the other hand, Chromecast works slightly different compared to the Firestick. The normal version of Chromecast supports all the video qualities maximum up to 1080p HD. Google introduced the latest version of chromecast Ultra that supports HDR video and 4K Ultra HD videos. To use the Chromecast Ultra, you need to connect to Ethernet in addition to WiFi.

If any of the apps and games are not supported by Firestick you have to side-load it to the Firestick. But in the case for Chromecast, the apps do not provide the cast icon, rather you have to use mobile casting option or screen mirroring option to stream unsupported app contents on your Chromecast TV screen. Most of the people choose Firestick because of its better gaming performance. Both Amazon Firestick and Google Chromecast works well for streaming. You can easily catch up on your live TV, movies, and TV shows through these streaming devices. Now the decision is up to you to choose Amazon Firestick vs Google Chromecast.