Nvidia Shield TV vs Firestick Comparison | Which one to Choose in 2022? 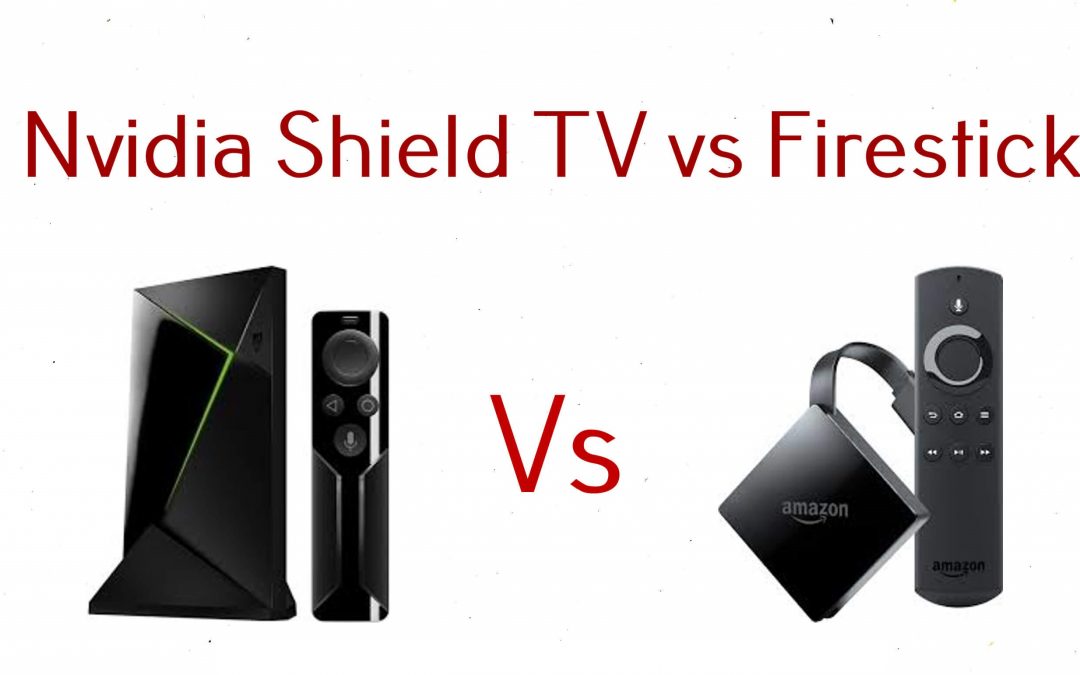 What is Nvidia Shield?

Nvidia Shield is one of the android-based outstanding media streaming players with a standalone gaming system. It supports various apps and comes along with remote and improved gaming controllers. You can stream all your favorite shows in the highest possible streaming quality 4K HDR, on this device. It is one of the expensive media streamers with excellent media features and gives access to GeForce Now Games streamed from Nvidia servers.

Amazon Firestick is the home entertainment device that allows you to stream all your media content from various online sources. It is a small dongle connected to the HDMI port on your TV. It supports tons of streaming apps and games available in the Amazon App Store. It comes with an Alexa voice remote and allows you to stream all the media resolutions, includes 4K UHD, Dolby sound quality, and has many more features.

When it comes to performance in terms of streaming, you can find popular apps like YouTube TV, Hulu, Netflix, Amazon Prime Video, Disney+, and other apps in the respective app stores like the Google Play Store for Nvidia Shield TV and Amazon App Store for Firestick. But the only thing that you can’t find on both these streaming devices is the Dolby feature.

Some additional features like Bluetooth also play a major role in the connectivity section. Both have a built-in Bluetooth version of 5.0, and with it, you can connect your speakers, headphones, and gaming controllers. But Nvidia Shield TV has more to it that you can find an ethernet port and MicroSD slot to expand your storage. In the storage department, Firestick is weak since you don’t have the option to expand the storage with its default of 8 GB.

To set up Nvidia Shield, it requires two USB cables, power, remote, and Internet. Nvidia Shield is connected to the HDMI port on your Television. Similarly, connect the ethernet port or WiFi network. Then select the language and enter your Nvidia Shield password or select connecting to Google option (optional) and enter your Google Account login credentials. You can access all your cloud-based saved games, recommended apps, and many more.

Once you have purchased a new Nvidia SHIELD TV, the NVIDIA SHIELD Remote is automatically paired with your SHIELD TV at the factory. It features user-customizable buttons, motion-activated Voice control, Bluetooth control, and an IR blaster to control your TV. It is also built-in with a Remote locator; it helps you find the remote when it is missing. In addition to the remote, it also comes with a gaming controller to control your gameplays.

Amazon Firestick comes with the Bluetooth remote along with its purchase. The latest version of the Firestick comes with the Alexa voice remote, which you can use to control all the Firestick functions that include search, play, pause, Install apps on Firestick, and many more using your voice commands. Amazon recently launched a mobile app called Amazon Fire TV, which you can use instead of using the remote. You may install this app on your smartphone (android and iOS) and use it as a Firestick remote.

Note: You can also use the voice command to turn off Firestick.

Amazon Firestick is built-in with the Amazon App Store; it contains more than 3,00,000 apps to install. It runs on the fork of Android OS, and so most of the Google Play store apps are supported by Firestick. In addition to all the official apps, you can also access third-party apps by side-loading them onto the Firestick.

Amazon Firestick is an effective streaming device with which you can stream your media files in various resolutions, including 480p, 720p, and 1080p. Unfortunately, the maximum video resolution supported by Firestick is 1080p. To resolve this difficulty, Amazon introduced the latest version of Firestick 4K. It supports all the HD resolutions up to 2160p and 4K UHD. It also supports Dolby Atmos, Dolby Digital, and Dolby Digital Plus. The supported image formats include BMP, GIF, JPEG, and PNG. Also, you can update Firestick to get additional features.

Nvidia Shield TV was first designed as a gaming console and later updated to a streaming device. It brings more games to your big screen, and you can find all your favorite games on the Google Play Store and Nvidia Game Store. It is also provided with GeForce Now, which is a cloud-based game streaming service. It supports both online and offline games to play with your friends. You can instantly transform your Nvidia Shield TV into a GeForce-powered PC gaming rig. With hundreds of supported titles and features like cloud saves, and cross-play on laptops and desktops, you can pick up a game from wherever you left off; it makes Nvidia Shield a perfect gaming gadget.

Amazon Firestick supports several gaming apps, as it also functions as a gaming console to play games but not to the level that Nvidia Shield provides. Most of the Android games are available on Amazon App Store. It allows you to use many wireless Bluetooth gaming controllers to play your game. Unfortunately, the wired controllers do not work well on Amazon Firestick.

Both Nvidia Shield and Amazon Firestick are cost-effective streaming devices with specialized features and specifications. Both the devices use the custom version of the Android operating system and also support several VPN services to protect your activities from theft or outside access. The Nvidia Shield is faster and allows you to access more apps without the hassle of side-loading apps. At the same time, Firestick also supports tons of apps. But it is less when compared to Nvidia Shield. If you are a gaming lover and wish to stream media go for Nvidia Shield. Else if you are more concerned with steaming movies and videos alone, go for the low-cost Firestick device.

1. Can I opt for Nvidia Shield TV?

Yes, if you need a better gaming experience, you can opt for the Nvidia Shield TV.

2. Which is the best option, Nvidia Shield TV vs Firestick TV?